The North Little Rock Convention & Visitors Bureau (NLRCVB), the destination marketing organization for the City of North Little Rock, reported an increase in 2017 lodging and foodservice tax collections and a $1.95 million economic impact of tourism in Pulaski County in its annual report this week.

“One reason for the increase in tax collections may be that beginning in July 2016, smaller hotels and all three RV parks began remitting the three-percent lodging tax,” says Bob Major, executive director of the NLRCVB. “2017 was the first full year that all 37 lodging properties began collecting the three percent.”

One of the three North Little Rock RV parks, the Downtown Riverside RV Park, is managed by the NLRCVB. The park saw a ten-percent increase in occupancy for 2017, with visitors from all 50 states and eight countries who stayed an average three days. These visitors spent an estimated $2.2 million in Central Arkansas.

In 2017 more than 6.4 million visitors spent $1.95 million in Pulaski County, according to the Arkansas Department of Parks & Tourism. ­­Though an exact estimate of how much of those visited North Little Rock is unavailable, the attendance numbers of key North Little Rock attractions like Verizon Arena and Dickey-Stephens Park indicate high visitation. More than 400,000 fans and event attendees visited Dickey-Stephens Park, Verizon Arena attracted more than 330,000, and Burns Park pulled in 31,635 sports events participants. Every year, an average 20,000 visitors come to the Arkansas Inland Maritime Museum. 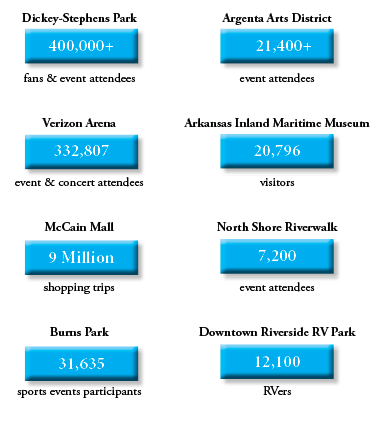 “When these thousands of visitors come to North Little Rock, they spend money in North Little Rock restaurants, hotels and other businesses,” Major said. “They are then paying taxes that would normally fall to residents. Visitors saved Pulaski County residents $33.3 million in local taxes last year – that makes a difference.”

To attract visitors, the NLRCVB actively markets, advertises and sells North Little Rock. One of the most profitable markets for North Little Rock continues to be sports groups. Burns Park alone, with an average 70 sporting events annually, generated an economic impact of $4.4 million in 2017. Because of this, the NLRCVB expanded its team in 2017 and hired Erica Goss as sales manager, with a focus on sports.

The full report is available here.